I like Darwin. I like Darwin a lot. Obviously he had many accomplishments in his lifetime that make him quite likable today, but what I really fancy about Darwin is that he seemed to have a ton of personality. I can’t think of the Beagle without thinking about the “oh shit” moment Captain FitzRoy had when the naturalist he hired as an intelligent companion for the 5 year voyage ended up being an outspoken, impatient and preoccupied conversationalist with regularly opposing views.

Anyway, this is one of Darwin’s lesser known experiments and it is certainly full of personality… and ridiculousness. Here’s the just of it: Darwin prodded a guy in the face with an electrical current and photographed the expressions that were produced. He would then share the creepy-ass pictures with anyone that visited him in 1868, asking them what emotions they saw in the man’s face. 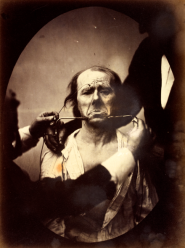 The idea was that he could use the data to identify what our universal core emotions are (if there are any), and what other expressions and emotions are extensions of the core ones. Darwin gathered enough info to write a book about it, The Expression of the Emotions in Man and Animals, but the validity of his data fell into question as it lacked consistent materials, a control group, and enough test subjects.

The methodology may have been flawed, but the concept is still intriguing enough for the University of Cambridge to pick up where Darwin left off. The Darwin Correspondence Project uses the same images, but uses a much larger sample: anyone and everyone. You too can participate (I just did) by heading to http://www.darwinproject.ac.uk/.

In the meantime, here’s some more of Darwin’s, likely regretful, test subject: