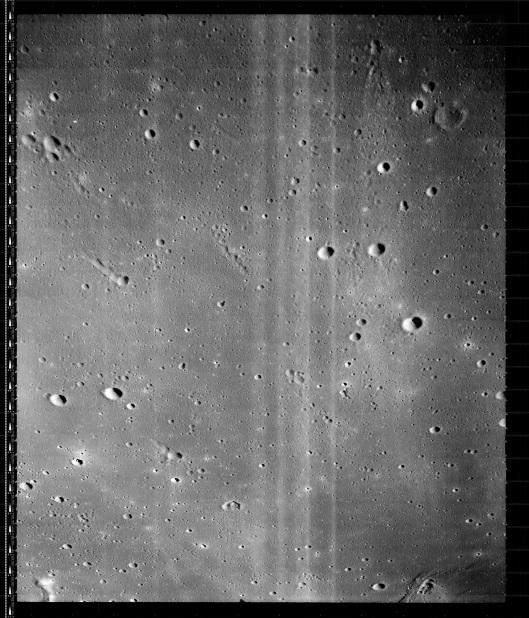 One of my favourite parts of the end of the calendar year are the many lists that everyone and their grandma seems to produce… As it turns out, this is something a lot of people hate about the new year… Nevertheless, here’s more!

From Mashable, here’s a list of scientific dreams that came true in 2012: 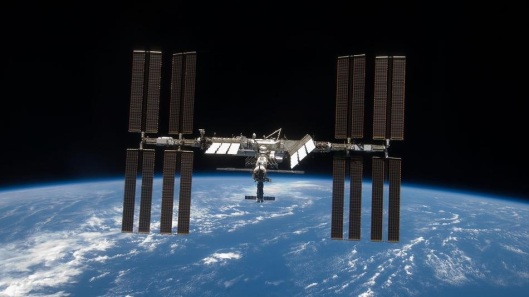 Bionic Limbs
The term “cyborg” was coined in 1960 by Manfred E. Clynes and Nathan S. Kline, in an article they wrote for the journal Astronautics. Since then bionic limbs have been a trope in many pieces of fiction -– The Six Million Dollar Man of the 1970s, the Borg of the Star Trek franchise, and even Darth Vader. In 2012 for the first time, a paralyzed woman was able to control a robotic limb and feed herself directly with her brain. Continuing work with primates demonstrated that it’s possible to make the brain-computer interface efficient enough to design more realistic movement into the limbs. The bionic limbs so far don’t look anything like their fictional counterparts, as they are still connected via external electrodes to the skull. But that dream seems to be a lot closer than it was even a decade ago.

Quantum Teleportation and Communication
While it’s not possible — yet — to “beam” an object around as in Star Trek, new records for zapping photons instantly from one place to another were set this year. Quantum teleportation has been done in the lab for some time, but the distances were on the order of a few yards. In 2012 the new record was 89 miles. In addition to teleporting, scientists built the first quantum Internet. It’s only a beginning, but teleporting photons for miles would enable communications that can’t be hacked or eavesdropped.

Genetic Disease Prevented
Genetic engineering for “better” humans is a theme that’s appeared repeatedly ever since Aldous Huxley’s Brave New World in 1931 — although at that point nobody knew what DNA really was. Later, films such as Gattaca and novels such as Beggars in Spain explore the implications of widely available genetic alterations. In 2012, we saw a proof-of-concept for mitochondrial diseases. About one in 200 people are born with a disorder of the mitochondria, the energy factories of cells. For the first time scientists were able to transfer the nuclear DNA of one human egg cell to another. Two groups independently found a way to transplant nuclei between human egg cells, leaving behind the mitochondrial DNA, which is passed from mother to child. The finding means that mitochondrial disorders could be cured before a child is born. Such techniques won’t cure something like Down’s syndrome, which involved nuclear DNA. But it shows that some manipulation of the human genome is not only possible, but happening.

The Universal Translator
Most of the time when intrepid explorers in fiction meet aliens, they always seem to speak perfect English. Doctor Who’s TARDIS generates a field that allows travelers to be understood, while the crew of the Enterprise never seem to need a dictionary. Kim Stanley Robonson’s Mars trilogy features one, but he didn’t think it would appear until late in the 21st century (the novels were written in the 1990s). While they won’t let you talk to aliens, in the last year several speech-to-speech translators have managed to reach real consumer devices — and even one type that uses your own voice. Most of the apps require an internet connection, though some, such as Jibbigo, can store their dictionaries locally. (If they ever add Klingon I’m taking it to the next ComicCon).

Head-mounted Computer Glasses
Readers of Charles Stross’ novel Accelerando would have eagerly anticipated Google Glasses — the Internet giant’s foray into augmented reality. In the novel, “venture altruist” Manfred Macx carries his data and his memories in a pair of glasses connected to the Internet. Google Glasses allow the wearer to access data, the Internet and capture life via a head-mounted digital camera. Memories will have to wait.

Private Space Flight
In many science fiction stories, space travel is private. In Ridley’s Scott latest movie, Prometheus, the Weyland Corporation funds an expedition to follow a star map to the distant moon LV-223. In real life, Elon Musk’s SpaceX launched the first of a dozen planned missions to the International Space Station. The Dragon capsule is designed to resupply the ISS, but Musk, who made his fortune as founder of PayPal, has bigger plans: a colony on Mars. Is 2013 going to be the year human spaceflight becomes an enterprise like railroads? We won’t know that for a while, but SpaceX is a heck of a start.

NASA scientists were sure to minimize any chances of a collision with Santa on Christmas night, and successfully launched its newest telescope from the National Science Foundation’s Long Duration Balloon (LDB) facility in Antarctica? The über sensitive telescope called BLAST, short for the Balloon-borne Large-Aperture Submillimeter Telescope, measures submillimeter light waves from stellar nurseries in our Milky Way and will do so for the next 12 to 14 days… 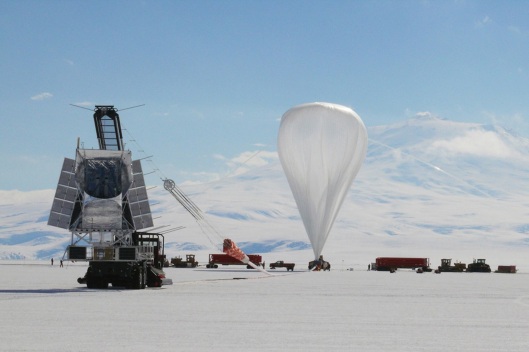 Clearly they had trouble deciding where to put the Christmas Tree this year. How many spots do you think they tried before they settled on this. 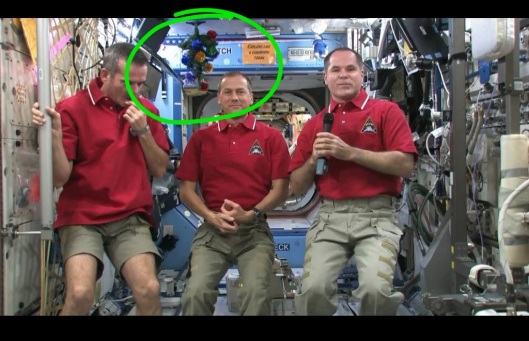 … Pretty damn far! I first saw this video by Veritasium on the Bad Astronomy blog, where Phil Plait hit the nail on the head: “Most people don’t really grasp just how far away the Moon is, and it’s the closest astronomical object in the sky!” True, most people don’t, myself included. Enjoy! 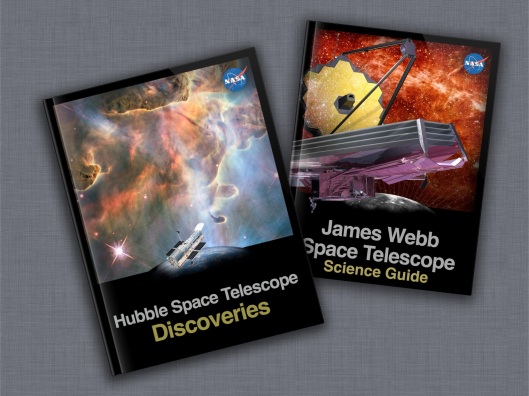 NASA sure is flush with Christmas spirit this year. First we get the awkwardly awesome nerd spoof of Gangnan Style, and now we get a couple of free, super sexy e-books!

Both are iOS offerings, so you’ll need to use your favourite Apple device. The Retina display is put to good use in these gems. Check ’em out!

Hubble Space Telescope Discoveries
… takes the reader on a tour of Hubble’s most significant science successes, combined with some of the telescope’s technology and history. For more than two decades, Hubble has had a front-row seat for cosmic events: comets bombarding Jupiter, the explosive death of stars, the birth of new solar systems and more. It helped reveal the age of the universe and stunned scientists with the discovery of the still-mysterious dark energy. The book details Hubble’s work in cosmology, planetary science and galactic science. Interactive elements include a gallery of images taken by Hubble’s different instruments, an interactive showing how astronomers measure distance in space, and a short movie on the discovery of planet Fomalhaut b. 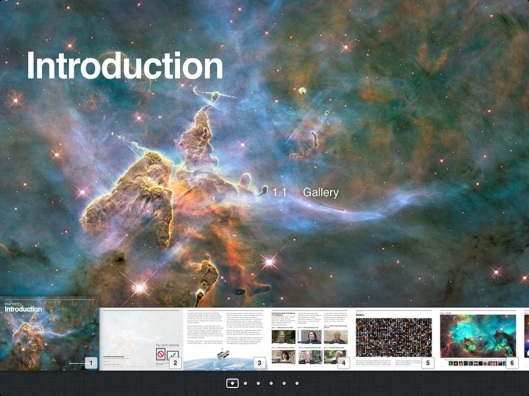 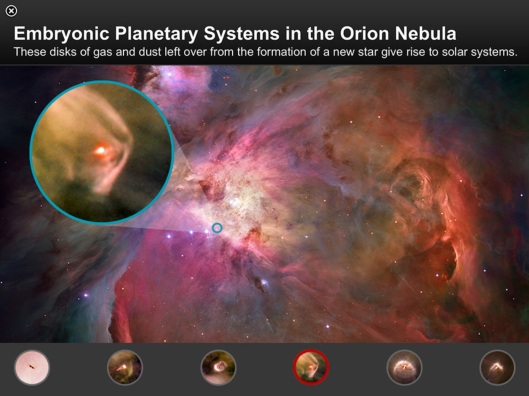 James Webb Space Telescope: Science Guide</strong
…readers will learn how the Webb telescope will reveal in much more detail mysteries of the universe that the Hubble is not able to see. With a mirror almost seven times the area of the Hubble Space Telescope's, and an orbit far beyond Earth's moon, Hubble's successor will utilize infrared light to see the first galaxies being born in the very distant universe, penetrate clouds of dust to reveal newly forming stars and solar systems, and analyze planets around other stars for traces of potentially life-giving water. The Webb book explains the innovative technology and design making the Webb a reality. Among the interactive elements are images that transform as they're seen in different wavelengths of light, a simulation of the formation of the "cosmic web" in the early universe, a 3-D fly-by interactive, and an animation of the Webb telescope unfolding in space as it nears its orbit. 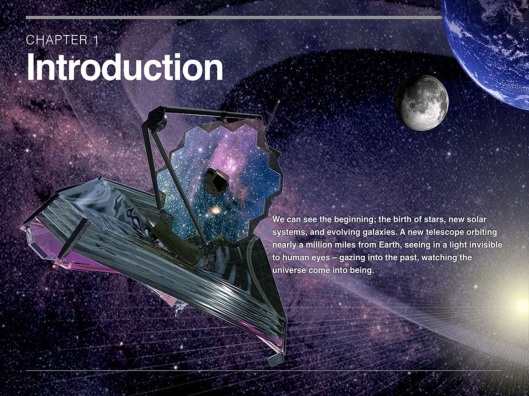 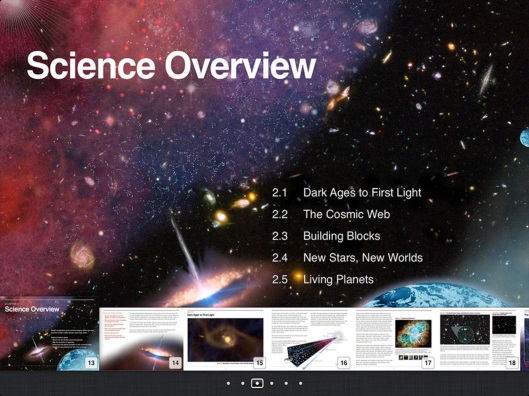 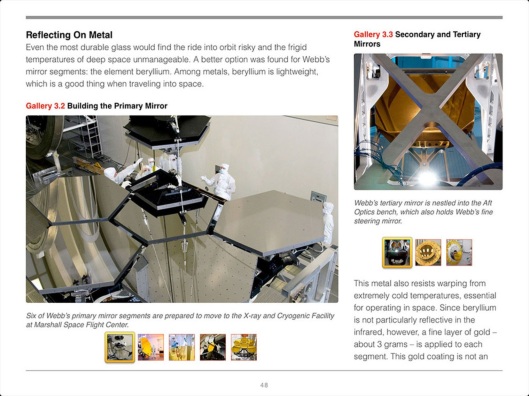 This is incredible! You have a space station with some of the most advanced equipment Earth can offer, yet this woman doesn’t have a hair-tie?

It’s been a while since I posted anything about the geeky little martian ambassador of science known as Curiosity. To be honest, the rover has totally slipped my mind as of late. No longer! Here’s an eerie recent shot that NASA released, of the Martian surface. 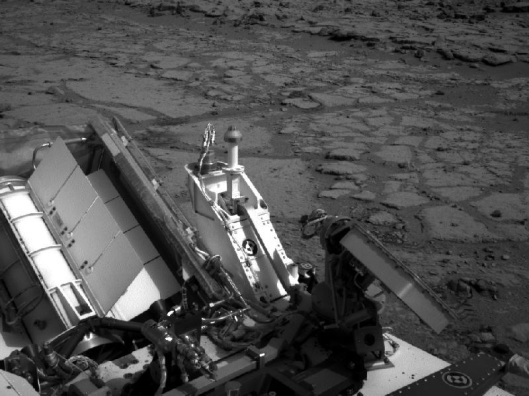 Looking Back at Entry Into ‘Yellowknife Bay’
The NASA Mars rover Curiosity used its left Navigation Camera to record this view of the step down into a shallow depression called “Yellowknife Bay.” It took the image on the 125th Martian day, or sol, of the mission (Dec. 12, 2012), just after finishing that sol’s drive. The Sol 125 drive entered Yellowknife Bay and covered about 86 feet (26.1 meters). The descent into the basin crossed a step about 2 feet (half a meter) high, visible in the upper half of this image.
Credit: NASA/JPL-Caltech

Smashing twin probe satellites into the moon at extreme speeds is sexy as hell… It’s not surprising that the tail end of NASA’s GAIL mission, in which the twin research probes Ebb and Flow were smashed into the lunar surface, is what is getting most if the project’s public attention.

It’s going to be a while before we start see the data acquired from the impacts trickle out from NASA, but keep in mind that the kamikaze robots were doing a lot more than working up the nerve to crash during their year in the lunar orbit. Ebb and Flow’s primary objective was to survey and map the moon’s gravity field with unprecedented detail and scope. The best part though, is that the data from this portion of the mission is available now.

The colourful images below we’re released by NASA today and paint a pretty spectacular picture of the entire Lunar Gravity Field: 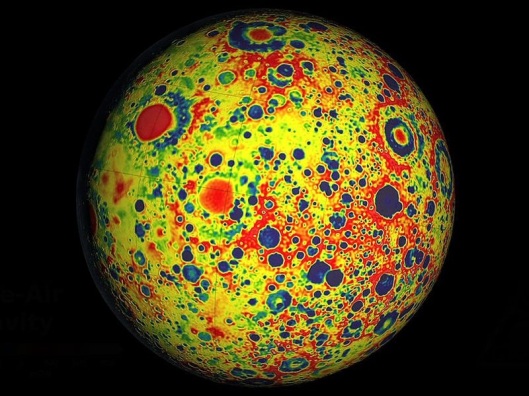 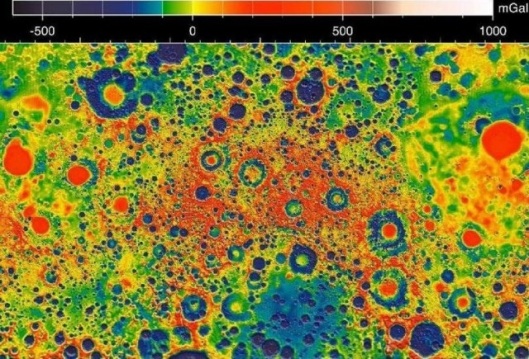 These two images show variations in the Moon’s gravity field as observed by NASA’s Gravity Recovery and Interior Laboratory (GRAIL) during its primary mapping mission from March to May 2012. The top image shows a portion of the far side of the Moon (right) and a portion of the nearside (left). At bottom is a Mercator projection of the complete lunar surface – the far side is at center and the nearside at far left as well as far right. Precise microwave measurements between the washing machine sized spacecraft, named Ebb and Flow, were used to map the lunar gravity with high precision and high spatial resolution. Measurements are three to five orders of magnitude improved over previous data. Here, red corresponds to mass excesses (mountains, for example) and blue corresponds to mass deficiencies (lowlands). The spherical red splotch on the top photo, just left of center, is seen at left center on the Mercator view, and the bull’s-eye-like object at upper right of the top photo is at upper left-center on the bottom image (a little above and to the right of the red splotch). Note that there’s more small-scale detail on the far side of the Moon compared to the near side since the far side has considerably more small impact craters. Data from Ebb and Flow will help to provide a better understanding of how Earth and other terrestrial planets in the solar system formed and evolved.